(partisan) gerrymandering manipulate the boundaries of (an electoral constituency) so as to favour one party or class.

In case you've been wondering why a German starts trying to understand US politics: It's a long story. Suffice to say that at this point I am not enjoying the current political situation in the West at all. The majority of people is making it far too easy for those in power to stay there. Here's my attempt to understand one aspect of it: How a US law put into the Consitution in good will has been subverted by new capabilities in modeling, statistics and data analysis.

To gain a first insight into redistricting I looked into the writings of Professor Justin Levitt.

Here is a list of concepts I required clarification about:

For now it is enough to know that in order to drive legislation in the US, you need the congress.

Going back to redistricting for congressional districts there is one hard rule: The population should be evenly distributed over all districts.

Here is a very small example that nonetheless explains how it works: Rig the election - with Math. I have copied the layout over here. 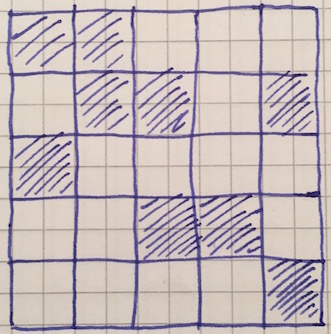 Each square has the same amount of population, namely 1. The striped ones are in the minority. The aim is now to set up the districts of 5 people each in a way that the striped squares get the majority of disricts. (When you get the district you get to send your representative to the Congress). Not sure whether there are more solutions, but here is mine: 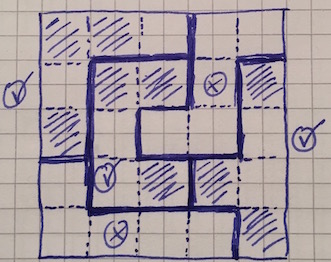 Now compare the popularity versus the congressional districts won:

Pretty impressive! As described here I have used the following techniques to favor the striped party.

Other helpful strategies seemed to be:

The above article also presents a number of measures that attempt to highlight whether a district has been tampered with.

As a final note I would like to point out a text from 2012 which outlines that gerrymandering has been done a lot more by the Republican party than the Democrats.

I am looking forward to seeing whether the US will be able to deal with this unfair advantage, since popular vote majorities by the Democratic party will otherwise mean nothing in upcoming elections.