There is a change request coming which requires some software to fake an external system. It should be usable by testers in order to exercise the use cases. A nice situation to finally test fubu mvc, the swiss army knife (factory) for friends of MVC Web frameworks. The following is partly backed up from my twitter timeline, partly backed up from my memory and stitched up with some good will. 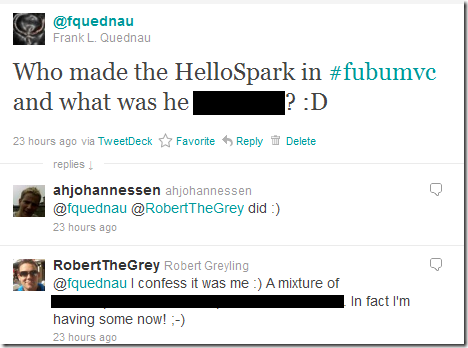 The following was just hacked into the UrlPolicy I had defined to dice routes out of the application’s actions:

The IUrlPolicy is a fubu mvc interface and (an) implementator(s) can be registered at bootstrap-time. The basic code is copied form the HelloSpark-App, line 14 introduces a check whether the action has an input model defined and whether it starts with “Url”. If that’s the case, we iterate over all properties with getter and setter that are attributed with RouteInput and we add it to the defined route through a method available on the route definition. And you know what? That works. With that I concluded my first day with fubu.

Looking forward now to getting an app done with fubumvc. I’ve already spotted a couple of interfaces that tickled my fancy!