Note:This text assumes that you know a little bit about graph databases and Neo4J in particular. If you don't know Neo4J, please have a read at [Neo4J's documentation][1]

In here we find the following principles when representing data in the graph:

Here is some cypher to create an example:

Consider the actual and recorded values to be e.g. days since inception... 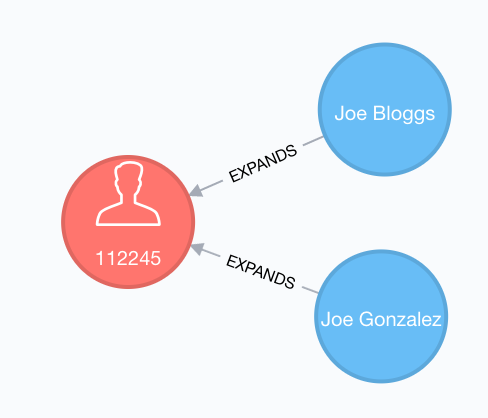 The query to get the right history of PersonData changes is pretty straightforward:

(assuming existence of only the EXPANDS relationship)

We can consider the following example:

The logic how such state changes should be considered is explained in the previous blog post. To recap:

Can we express this in Cypher? Well, it's not pretty, but it's possible*):

Depending at which point in time you look at the state you now get two different histories:

What the query does is to

As is often the case with graphs, there are quite a few ways you can go about storing data with meaningful relationships. Other representations could be

As usual with graphs, think in advance the kind of questions you will want to ask :)

*) Disclaimer: I am no cypher expert. The query expresses the logic outlined in the first blog post with some additional noise, some compaction may still be possible.